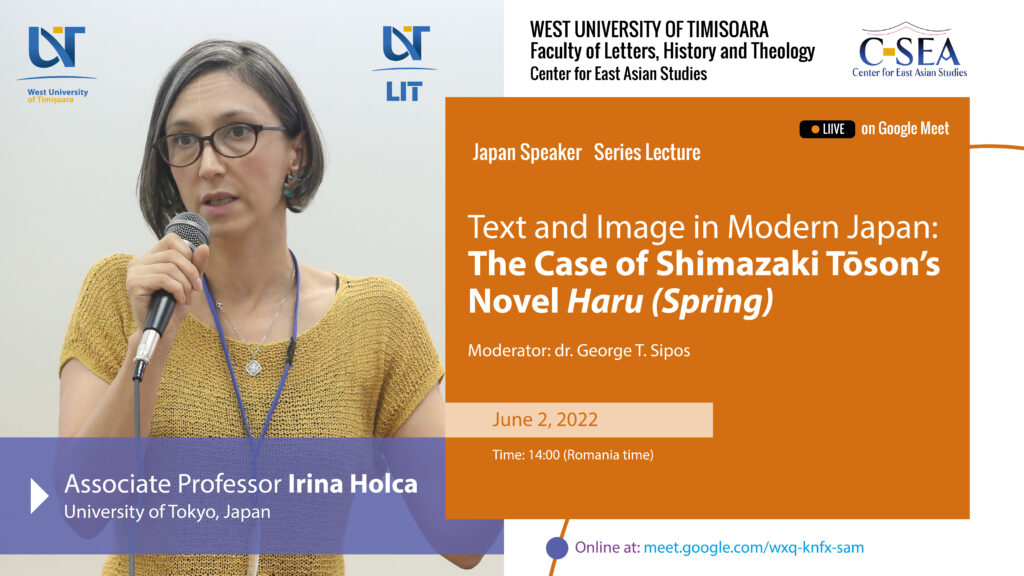 This talk looks at the changing relationship(s) between text and image from pre-modern to modern Japan, with a focus on the work of Shimazaki Tōson, especially his novel Haru (Spring), published in installments in the Asahi newspaper (1908). Written in the modern and seemingly transparent genbun icchi (unified written and spoken) style and purporting to express the life and struggles of young Meiji intellectuals “as they really are,” Haru will be discussed in conjunction with the sketch-like illustrations provided by young painter Natori Shunsen. Natori takes numerous representational hints from European movements such as Art Nouveau, while drawing on the other hand from his experience as a reporter.

Irina Holca obtained her M.A. and Ph.D. degrees in modern Japanese literature from Nara University of Education and Osaka University, respectively. She joined Kyoto University’s Institute for Research in the Humanities as a senior lecturer in 2014 and went on to become an associate professor in the PEAK Program at the University of Tokyo in 2019. She specializes in modern and contemporary Japanese literature and is interested in translation and media studies. She is the author of The (Re)Opened Text: Media, Otherness, and Gender in Shimazaki Tōson’s Works (Bensei Shuppan, 2018; in Japanese), and co-editor of Forms of the Body in Contemporary Japanese Literature, Society, and Culture (Rowman and Littlefield, 2020). A translator of Japanese novels into Romanian, Holca published works such as Banana Yoshimoto’s Kitchen, Natsume Sōseki’s I Am a Cat, Mori Ogai’s Vita Sexualis, among others.